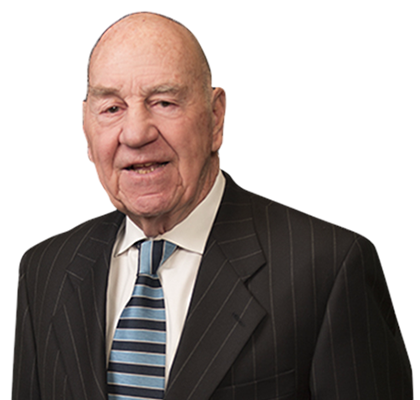 The attorneys of Mirabella, Kincaid, Frederick & Mirabella, LLC mourn the loss of our dear friend, mentor and partner Joseph F. Mirabella, Jr. For more than 50 years, Joe was an icon in the DuPage County legal community, serving as a leader and an example for everyone who had the pleasure to work with him.

After serving in the U.S. Army from 1958 to 1960, Joe graduated from Chicago-Kent College of Law in 1964, and he took over the legal practice established by his father, Joseph F. Mirabella, Sr. He devoted his time exclusively to family law, and after his partner John Kincaid joined the practice in 1970, the firm expanded to provide representation in civil cases, including personal injury and probate. Due to Joe’s leadership, MKFM has become the longest-running family law firm in DuPage County. Joe’s daughter Lynn Mirabella joined the firm in 2005, and Joe was proud to have her carry on the family name.

Throughout his career, Joe was committed to improving the practice of family law in DuPage County. He suggested that the DuPage County Bar Association (DCBA) establish a committee for family law, and he chaired this committee for many years. Through his efforts, the committee gained respectability throughout the state of Illinois. Joe also served as the Past President of the DCBA and chaired numerous other committees. He was an Assemblyman of the Illinois State Bar Association, and he served on the ISBA’s Family Law Council.

Joe received numerous honors and awards throughout his career. He was named the DuPage County “Man of the Year” in 1976 and 1977. In 2009, he received the Justice Anthony M. Peccarelli Award, which honored him for his years of service to the legal community. The DuPage Legal Assistance Foundation awarded him a Pro Bono Service Award in 2014. In 2016, he and John Kincaid received the Ralph Gabric Award from the DCBA, recognizing their character, leadership, and legal professionalism.

Joe believed in the importance of faith, family, and friends, and he always strived to lead by example. His friends included dignitaries, judges, lawyers, doctors, servers, clerks, golf pros, and garbage men. He was an inspiration to generations of lawyers, and he will be profoundly missed.