The Mediation Process for Divorcing Couples in Illinois 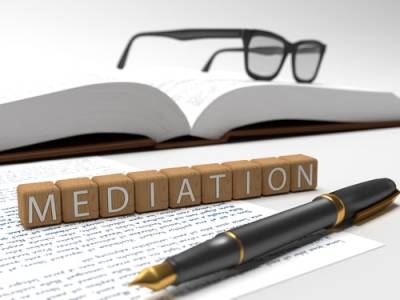 Understandably, divorcing couples rarely see eye-to-eye on every subject. They may agree about who should have the majority of parental responsibility but disagree about whether or not to sell the house. Alternatively, they may agree on issues of property division and spousal support but disagree on how they will share custody of their children. Some couples disagree about nearly every aspect of their divorce. When divorcing spouses need help coming to an agreement about divorce issues, mediation can be a valuable tool. Through family mediation, divorcing spouses have a chance to make their thoughts and concerns heard while working toward a solution on divorce issues. Read on to learn about the mediation process in Illinois and how you may benefit from mediation.

While every mediator is different, the mediation process generally begins with the mediator organizing a joint meeting with both spouses and explains his or her role in the mediation process, goes over the general procedures for mediation, and reminds the parties that what is said during mediation is confidential. The spouses will then have an opportunity to voice their concerns related to the divorce and discuss their goals for mediation. The mediator will help facilitate a productive discussion between the spouses in order to identify potential solutions.

Working to Find Solutions Both Spouses Agree To

A mediator may meet with the spouses separately after the initial joint meeting. During this individual meeting, the mediator can clarify each spouse’s concerns and hear their proposed solutions to these issues. After this, a series of cooperative joint discussions and individual meetings will take place during which the spouses will work to find resolutions to their divorce issues which both parties can agree to. These meetings will continue until the issues are adequately resolved or until the mediator and spouses decide that mediation is not producing the desired results. If the spouses are able to reach an agreement on divorce issues, the mediator will provide a Memorandum of Understanding describing the agreements the spouses have come to and identifying any issues which remain unresolved. The mediator will file a report with the court and the spouses’ attorneys will then prepare a final settlement agreement based on the information included in the mediator’s Memorandum of Understanding.

How Mediation Can Help Disputing Couples Reach an Agreement

If you are a TV or movies buff, you have probably seen many dramatic scenarios played out in a courtroom. In the movie Liar Liar, for example, a divorcing couple with children bitterly argues about who should have custody of the kids. During the divorce proceedings, the wife admits that she wants full custody of the children even though her ex-husband is a “wonderful father.” Although courtroom scenes in movies are usually highly exaggerated and dramatized, the truth is that resolving family law issues in court can bring out the worst in people. Sometimes, simply being in a court environment makes otherwise reasonable spouses argue every detail of their divorce. Fortunately, there is an option for Illinois residents seeking a divorce who wish to resolve their issues without court intervention. Mediation is an alternative to courtroom litigation which helps disagreeing parties amicably negotiate a practical agreement.

Benefits of Mediation Over Litigation

During mediation, a mediator helps disputing parties identify where their disagreements lie and explore various compromises and solutions. The mediator facilitates a calm, rational, productive conversation between the two parties.

Couples who feel a great deal of resentment for each other often have trouble discussing matters of child custody or property division reasonably. With the help of a mediator, the parties can better focus on what is really important and come to an agreement without resorting to fighting. Because the couple ultimately comes up with their own solution to their disagreements, mediation puts much more control in the hands of the disputing couple than litigation does. It is probably for this reason that more people comply with agreements reached through mediation than those decided by litigation. Individuals who participate in mediation are less likely to be brought back to court by a party who was unhappy with the outcome of a court decision. Another major benefit of mediation is that it is often significantly less expensive conflict-resolution method than litigation.