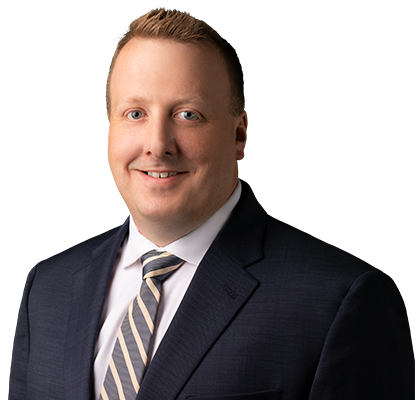 Michael T. Sanderson (he/him) joined Mirabella, Kincaid, Frederick & Mirabella, LLC in August of 2021, where he practices in the areas of family law, civil litigation, employment law, personal injury law, including medical malpractice cases, and Veteran’s rights. Prior to joining MKFM, Michael worked as an Assistant Regional Counsel for the U.S. Department of Health & Human Services, where he defended the agency in claims of employment discrimination and medical malpractice as well as administrative actions involving nursing homes and medical providers/suppliers.

Michael began working in family law while still attending law school through his work with several Chicago-based law firms. He also interned with Family Rescue in Chicago, where he assisted unrepresented victims of domestic violence file for Orders of Protection and/or Stalking/No Contact Orders. Since he has been through a contentious custody dispute himself, Michael understands that family law cases can be emotionally charged and difficult to navigate without the proper guidance. As such, he endeavors to assist clients in finding the best path forward for themselves and for their families.

Prior to beginning his legal career, Michael served with the U.S. Army Military Police, where he twice deployed to Iraq in support of Operation Iraqi Freedom (Baghdad 2004-2005; Iskandariyah, Iraq, 2006-2007). Michael was wounded by a roadside attack during his second deployment and subsequently retired due to his injuries. As a result of his military service, Michael has a unique understanding of the issues faced by the Veteran community and strives to assist Veterans as they navigate life outside the military.

Michael is an aggressive, client-focused advocate who aims to provide each client with the best possible representation to meet his/her/their goals.

When not practicing law, Michael enjoys working on cars, travelling, and spending time with his wife, two children, and two dogs.